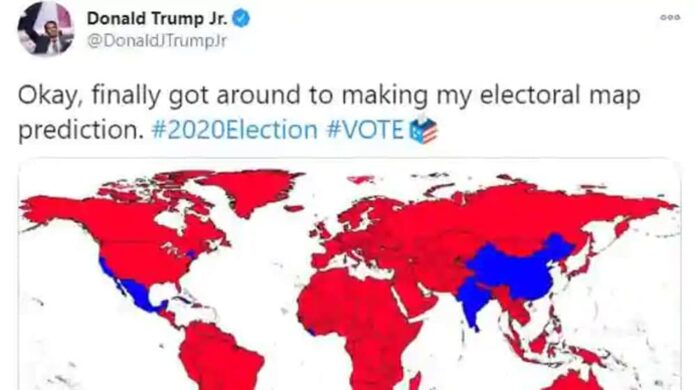 As the United States moved to elect its new President on November 3, Donald Trump Jr., the youngest son of President Trump, shared a world map engulfed with ‘red wave.’

His motive was to show that the world supports his father’s re-election in the Oval Office. However, the tweet went viral for other reasons.

Trump Jr. made more than one comical errors in the map. He confused India with Iran, showed the Caspian Sea, Black Sea, Azov Sea, Aral Sea, and Antarctica as countries, while many other Asian countries as water bodies.

The predominantly red world map showed India (probably in confusion with Iran), and some other nations in blue meant that they would vote for the Democrat candidate, Joe Biden.

The fun started when Indian netizens realized that the entire Kashmir region has actually been shown as part of Pakistan. Trump’s map showed India in blue, while Jammu and Kashmir in red along with Pakistan, depicting support for Donald Trump.

The tweet left Indian Twitterati in a frenzy as they criticized Trump Jr over ‘wrong’ depiction of geographical boundaries.

Congress leader, Shashi Tharoor, took a dig at the Modi government and ridiculed the Prime Minister’s bromance with Trump.

Note that this is the second time when Pakistan’s new political map has gained international recognition. Last week, Saudi Arabia had issued a celebratory banknote of 20 Riyal, showing Kashmir as part of Pakistan.