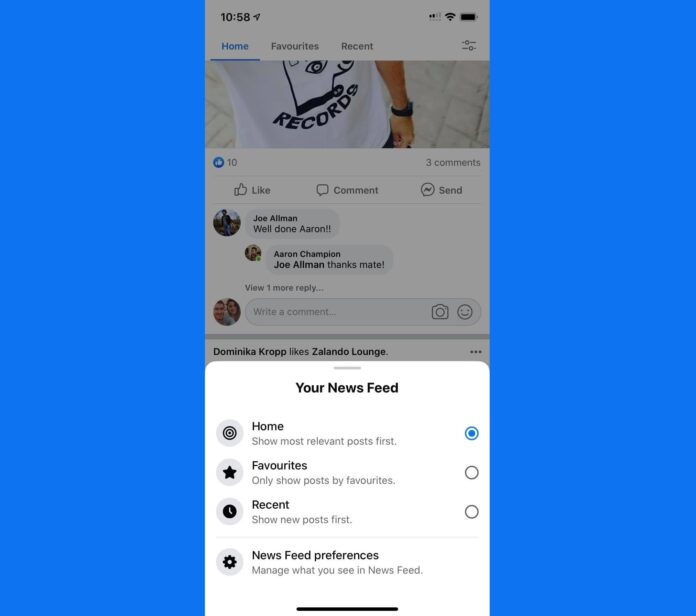 Facebook has decided to finally make its News Feed sorting options available to more users after months of extensive testing. The update simplifies the sorting options making it easier to understand giving users a clearer choice as to how they want their feed to be arranged and displays the three main options in the menu and has a separate option to allow users to make more changes if they want to. However, a point to note is that users will still be able to see only those posts that the algorithm selects; we will discuss them a bit.

One of the options, the Most Recent feed, was already available to users in Facebook’s settings but this update has added two more options and made them easier to access by placing them on the main News Feed page. The menu to view and select these options appears on the top right of the News Feed page. Once open, it shows the three options, i.e, Home which is the default setting, Favorites which allows the user to select up to thirty people, and Pages whose posts will be highlighted with a badge and will appear higher up in the News Feed, and Recent which shows the same content as in Home but will show it in reverse chronological order which means that the most recent posts will be shown before others.

Selecting the Recent option does not mean that you will be able to see posts from all of your friends and follow Pages as they happen. The content shown will still be selected by the algorithm, but it will show recent posts from the pages it has selected. These options give the user a perception of having more control over their feed, but the real control still lies with the algorithm.

As mentioned before, Facebook has been testing these options extensively over the past few months and these settings were picked up by reverse engineering expert, Jane Manchun Wong, who spotted them back in February, but it was kept quiet but now that it’s beta has been made available more users are becoming aware that a mass update as to how they control their feeds may be approaching. Facebook may face some backlash after users realize that they still don’t have an option to revert their feed, back to the old algorithm.

This update will introduce very small changes to how users control their feeds, though having the options to switch between settings as to how their feeds will appear may just work in Facebook’s favor, and giving users an illusion of control may pacify them for the time being.