Home Tech Mute them all forever now on WhatsApp if you do not want...
WhatsApp
Facebook
Twitter
Email
Linkedin 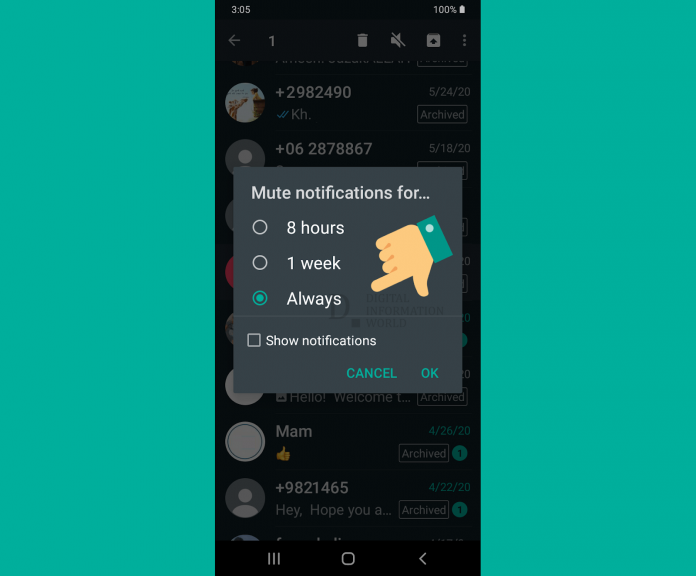 WABetaInfo, a platform that unearths upcoming features on WhatsApp had reported a while ago that the Facebook-owned messaging app has been working on a new Mute feature. Recently, they spotted this feature in WhatsApp’s latest beta version and it allows users to mute notifications from a specific group or individual forever.

Apparently, one year was not enough for many users and WhatsApp realized that if someone mutes the notifications for one year, they might as well love to mute them forever! Quite perceptive!

The question here arises why people mute the notifications from some people or some groups on WhatsApp messenger?

The answer is simple. People do it to not get continuously disturbed by nagging people and groups. Many users believe that keeping the phone silent makes them more productive throughout the day, and they work more efficiently without the constant disturbance from their messaging services.

However, silencing the phone is often a little hassling because it may make you miss some important calls and messages too, which probably need instant attention.

But with the ‘mute notifications’ feature, you can simply silence the groups or people in your chats about whom you believe that they will not be sending you any messages requiring urgent replies. Such groups of people are mostly friends who indulge in all kinds of conversations when they have free time, but their free time may not align with your work time. So, you cannot afford to be constantly nudged by their notifications, and hence, you put them in the silent mode.

Many people mute others for the sake of their mental peace. If you think that you will end up engaging with friends on your messenger and will not be able to focus on your work properly, maybe you need to mute your notifications too.

And then there are some larger groups which have a lot of people from all over the world. They keep messaging and discussing things, and this annoys you a lot, but due to any reason, you cannot leave the group. So, to avoid getting disturbed, you can now mute their notifications for good.

If this feature has reached the beta version 2.20.201.10, it’s soon coming officially too for public stable versions. Let us just wait for its final rollout.

Along with Always Mute option we are hoping that Whatsapp will also introduce its most anticipated Permanent/Ignored Archive feature to make its users life more easier.